His name is Kirill Tereshin and he’s from Russia. Also known on the Internet as “Ruki Bukuki”, which standards for bazooka arms.

Why bazooka arms? Because he likes to dabble in Synthol.

What Synthol you ask?

Wikipedia describe it as:

A recent trend in bodybuilding is to inject synthol[50] into muscles to create larger bulges, or injecting PMMA into muscles to shape them. Use of PMMA to shape muscles is prohibited in the United States.[51]

Site enhancement oil, often called santol or synthol (no relation to the Synthol mouthwash brand), refers to oils injected into muscles to increase the size or change the shape. Some bodybuilders, particularly at the professional level, inject their muscles with such mixtures to mimic the appearance of developed muscle where it may otherwise be disproportionate or lacking.[52] This is known as “fluffing”.[53][54] Synthol is 85% oil, 7.5% lidocaine, and 7.5% alcohol.[53] It is not restricted, and many brands are available on the Internet.[55] The use of injected oil to enhance muscle appearance is common among bodybuilders,[56][57] despite the fact that synthol can cause pulmonary embolisms, nerve damage, infections, sclerosing lipogranuloma,[58] stroke,[53] and the formation of oil-filled granulomas, cysts or ulcers in the muscle.[57][59][60] Rare cases might require surgical intervention to avoid further damage to the muscle and/or to prevent loss of life.[61] 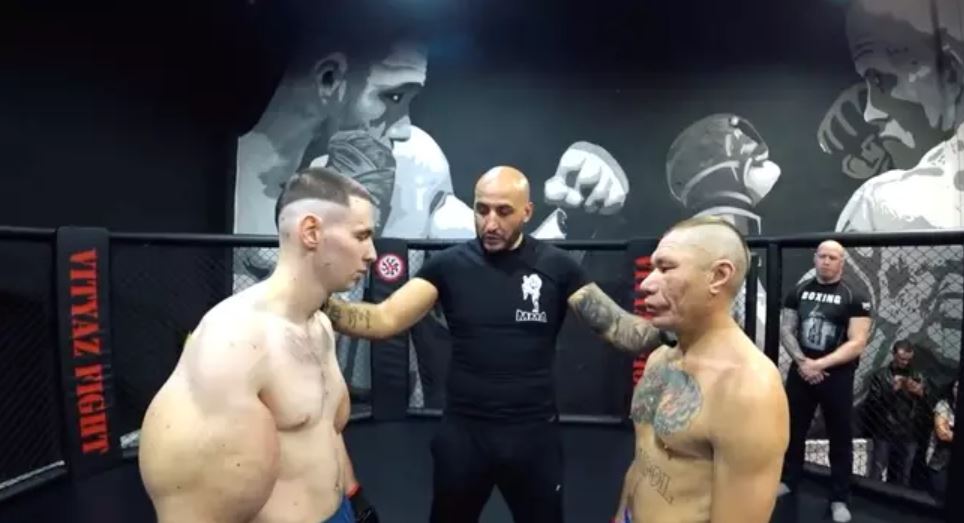 Sesame oil is often used in such mixtures, which can cause allergic reactions such as vasculitis.[62]

As the injected muscle is not actually well-developed, it might droop under gravity.[55]

Instead of building his guns the normal way, or at least using some “juice” which actually change your hormones to grow real muscles, he filled his arms like with oil like a bloody balloon.

Anyway, he’s dabbled in face slapping championships, but decided enough was enough and he needed to get in the cage to test these bad boys out. 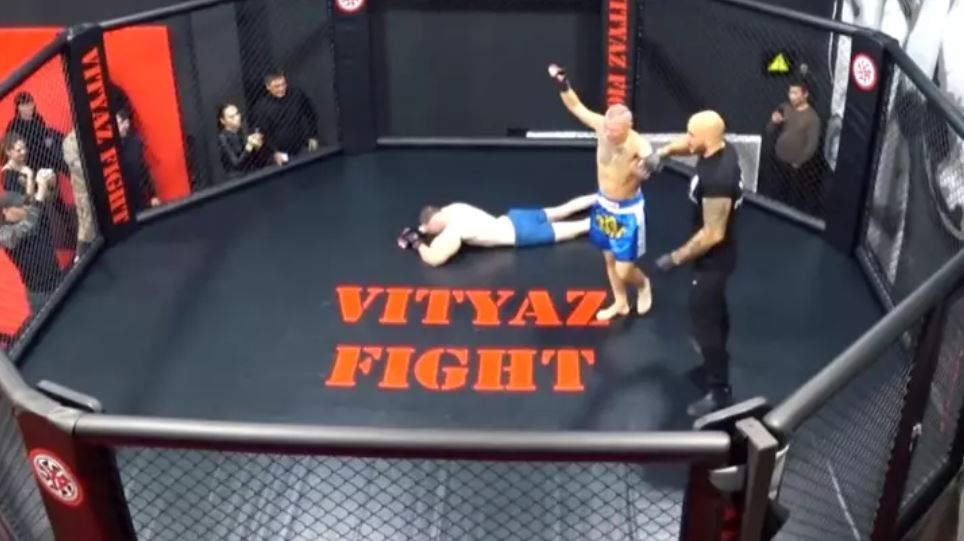 CHECK OUT THE FINISH HERE:

Russian Mobster Aleksander Emelianenko Engages In All Out War With Opponent

If you’re looking for two scarier dudes to match up against each other in the cage, it would be hard to go past Jeff Monson and Aleksander Emelianenko. Not only do they bother just look crazy enough to kill the ot...

By admin 1 year ago

Matt Mitrione returned to the cage last night in the main event of Bellator 216, looking to get back in the win column in a fight with feared Russian striker, Sergei Kharitonov. In his last fight, Mitrione had been...

Max Holloway continued his outstanding run at the top of the featherweight division in the UFC with a superb win over Brian Ortega at Scotiabank Stadium in Toronto over the weekend. The 27-year defended his crown for ...

By admin 1 year ago

Let's take a trip back to 2015 when Muay Thai met Kung Fu in a superb display of combat. The fight between Buakaw Banchamek & Yi Long “The Shaolin Monk” was billed as the Fight of the Century, and millions across...

CM Punk is one of the more famous names in the UFC, but not for his MMA ability. The 40-year-old made himself a household name in the WWE where he rose to be the sixth-longest reigning champion between 2011 and 20...

Far removed from the chaos that was going on inside T-Mobile Arena in the wake of UFC 229’s main event, some parallel chaos was going down in Nurmagomedov’s dressing room as his team went absolutely ballistic. Pro...